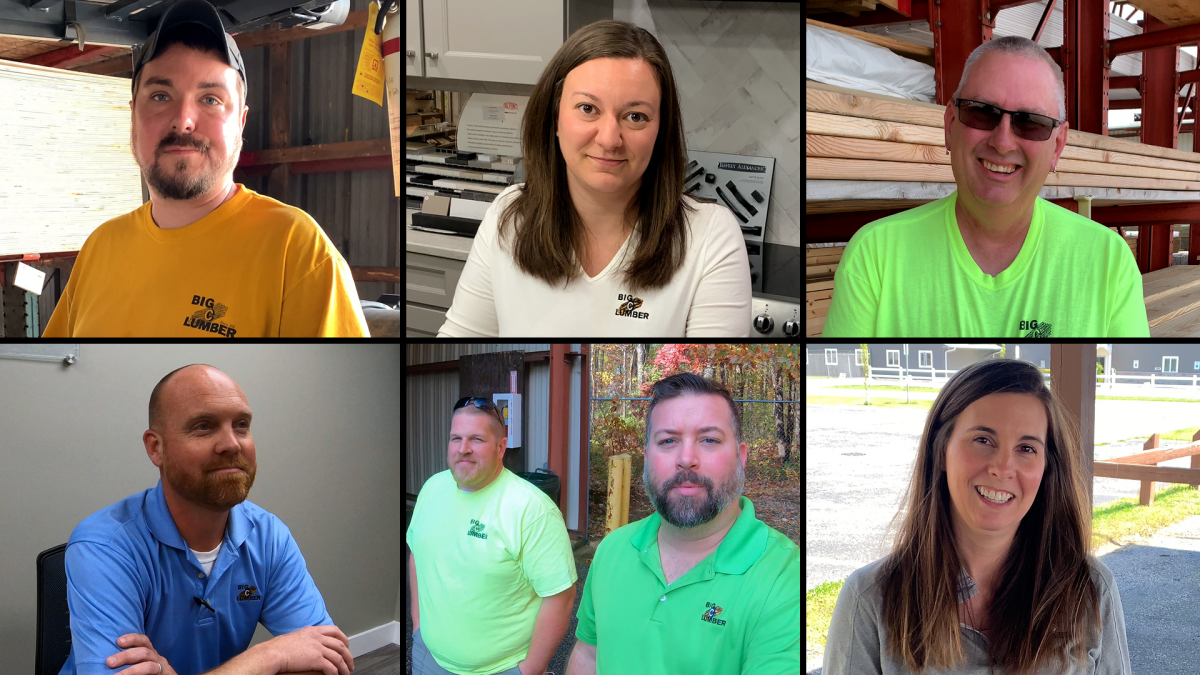 Laurie Mills says that the people who make up a company are what makes a particular business a great place to work.

She’s the Director of Continuous Improvement at Big C Lumber and knows a thing or two about building a career.

Mills started her career at Big C Lumber at the Roseland location in 1988. When she first started, she had zero lumber or computer knowledge and was one of three women working in the office.

She had applied to two other jobs and received offers from all three on the same day. Mills ended up taking the job at Big C because it was something completely different from what she’d done before. Another major reason she chose Big C: the people.

“When I walked into the office, I heard people laughing and ribbing each other,” she says. “I got the sense that these were people I could hang out with — they were people who were having fun at work!”

When Mills began her career at Big C Lumber, she started in inside sales, supporting salespeople who worked with contractors.

As she started to grow her family, she realized her work-life situation was changing, so she approached her manager about making a change to her role.

“I remember going to my manager and telling him I wanted to talk about networking. He thought I said, ‘not working,’ and his face went white!” she says. “That’s when I realized they wanted to keep me around, and that this was a place where I could make a difference and have a career.”

She started to take on some database design work before eventually moving into a role in the IT department. She became the accounts payable manager, developed her skills further as she took on more projects, and eventually became the executive assistant to the president of Big C Lumber.  She later became the controller taking on additional banking functions, but never losing her passion for the people of Big C Lumber.

A need for a new point of sale system required Mills to step away from her full-time duties as controller. As the new system was implemented, a new role focused on training and employee cultivation developed for her.

The Career Development program at Big C is geared toward employees who want to turn their position into a career choice and teaches them how to have success at Big C. It’s also about giving people a skill set that they can take with them wherever their career takes them.

“We didn’t have this program when I started. The things I learned along the way have been because we had a need to fill,” Mills says. “Our program today is a better way to identify people that may have the mentality I had 33 years ago, where I wanted to learn things and I wanted to gain experience — it’s more driven and there’s a better pathway now.”

Career development is something that Big C Lumber takes seriously. Whenever possible, we try to promote from within. In fact, most management positions are currently filled with promoted employees.

“If we have an open management position, folks in the Career Development program are who we’re looking at first,” Mills says. “We’ll look at that pool of people that have expressed interest in managing and see if there is someone who would be a good fit.”

Employees in the program have access to mentors as well as senior leadership, who help give them specific advice, but anyone at Big C can have their ideas heard.

“Throughout my time at Big C, I’ve always felt comfortable going to our president and asking, ‘Hey, what if we try things this way.’ But those suggestions can come from anyone,” Mills said. “The fact that your idea is considered and not just pushed aside is amazing.”

In fact, we developed an entire value statement, which is printed and posted everywhere around our offices and retail stores. But they’re more than just words, they make up the heart and soul of what it means to be a part of the Big C family.

“If you make a decision as an employee at Big C based on our key values, you’re going to get support from the top down,” Mills says. “At Big C Lumber, it’s about having a caring mentality and doing the right thing, whether someone is looking or not.”

It’s not just about the values, though. Big C Lumber is a family-owned company, and each employee is a part of that family.

“We really value family, as a company,” Mills says. “We take that very seriously. If one of us is struggling, we all pull together to help that person.”

From company camping trips to minor league baseball outings, Big C is committed to providing opportunities for employees to connect from the bottom to the top.

Because it’s family-owned and not run from a corporate office in some faraway major city, all decisions are made on a local level. We’re able to make adjustments as necessary for the different communities we operate in. We have to be flexible.

“We trust our management team to run their branch as if it’s their own store or their own business,” Mills says. “Our staff doesn’t treat customers like they’re just a potential sale, we offer excellent customer service and treat people right.”

Mills points to her own experience and explains that having many years of experience in the field isn’t necessary to be a success at Big C. Instead, it’s about having a good work ethic, having a team-member mentality, and understanding how a family functions.

“You’re not going to get along with all your family members all the time, and you’re going to occasionally have squabbles and different points of view,” she says. “But in the end, you love each other anyway!”

LOOKING FOR A CAREER? THINK BIG!

Big C Lumber has been in business for 100 years. That’s a big deal.

Taking care of our employees and hiring the right people has played no small part in that.

“The fact that Big C cares about their employees from top to bottom is huge,” Mills says. “If you’re looking for a stable work environment where you can be part of a team, Big C Lumber is a smart career choice.”

Every day at Big C is a little different, and you could be doing several different jobs. Part of the day you may be driving a truck, loading a semi, or something entirely different.

“Hopefully when you leave for the day you’ve had some laughs and feel a sense of accomplishment that you did some things that you needed to do for the day,” Mills says. “And you’re ready to do it all again the next day!”

If you’re torn between several job opportunities, like Mills was when she started her career, she has some advice for you.

“It’s all about the people and culture. If it feels like a group of people you want to be with and can have a little bit of fun with, that’s a good fit,” she says. “Ask yourself if you have some fun where you work, if you have friends at work, if you care about the people at work. If you can’t answer yes to those questions, then why are you there? You spend a lot of time at work, and if you don’t enjoy it, maybe there’s a better fit for you somewhere else.”

To start your career at Big C Lumber, visit our careers page and learn more about the positions we have available.

Toggle the Widgetbar
We use cookies to ensure that we give you the best experience on our website. If you continue to use this site you agree to the terms and conditions.OkTerms and Conditions