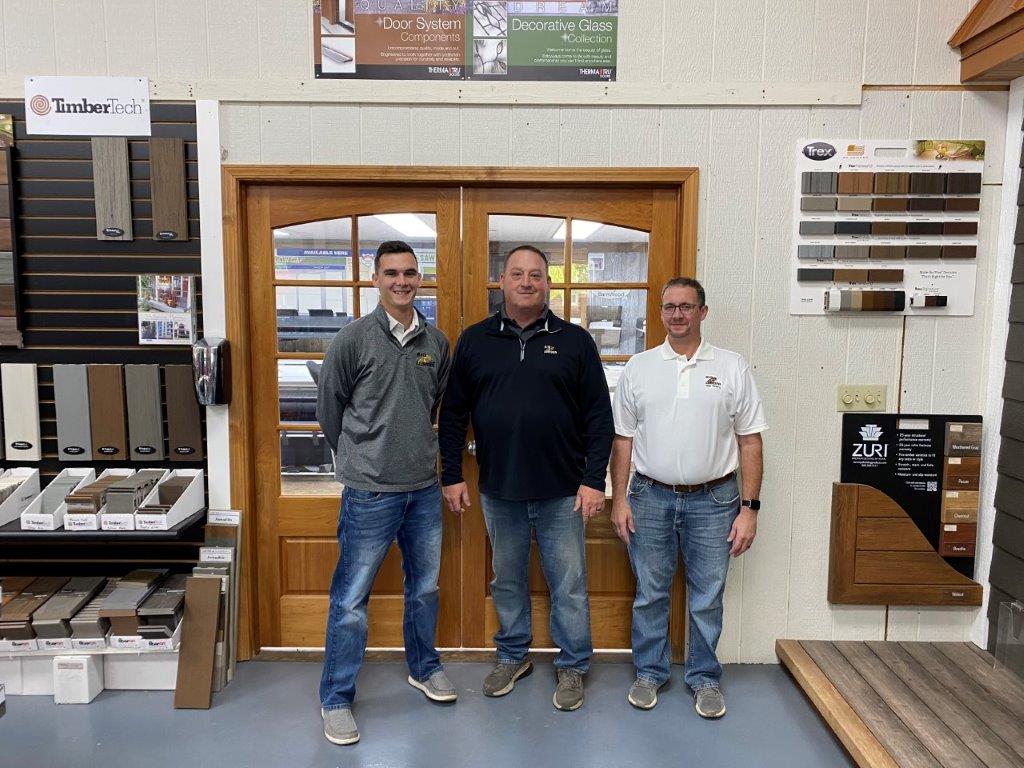 You wouldn’t think of distributing ice as a warm environment, but Shawn Williamson did.

In his early career, Williamson worked for a small, family-owned ice distribution company. It’s a memory he cherishes, and he says that was the warmest and most caring space he’d ever worked — until he came to Big C Lumber.

“I’ve had a lot of different job experiences in my life. But I couldn’t imagine leaving here to work anywhere else, frankly,” he says. “The support you can get through all channels and all people at this company is second to none. Big C is such a compassionate place — everyone truly knows everyone else.”

Williamson is the general manager of the Big C Lumber location in Shipshewana. He’s also one of four mentors for Big C’s career development program. The program’s goal is to help employees gain the knowledge and skills they need to have a successful career at Big C, or anywhere.

Williamson’s first day at Big C was at the start of the new year in 2004. It was an unusually warm 60-degree January day that almost hit the record high. He was starting as an inside salesman at the Coloma, Mich., location after having left a different lumber company.

At the national lumber company, he felt like a cog in a machine and the focus was only about numbers and meeting quotas. To him, Big C represented everything the other company didn’t.

“Here there’s a strong emphasis on community, family, and doing the right thing. It’s about treating others as you’d like to be treated,” he says. “It’s not uncommon for us to donate a few free roofs each year, or handicap ramps to people in need in the community. Everyone at Big C is out there showing strong support for the community, and you’re not just a number — you matter.”

After a few years jumping between inside and outside sales at different Big C locations in Michigan, Williamson landed a role as an operations manager at the Eau Claire, Mich., location. It was close to his home in Dowagiac, Mich., and it allowed him the opportunity to join the leadership development program.

Williamson found a lot of satisfaction working in Eau Claire. He found a nice work-life balance and enjoyed what he did for five years. But Bill Wallace, then the vice president of Big C Lumber, had bigger plans for him. A management position opened in Shipshewana, and Wallace had his eye on Williamson.

“I wasn’t severely interested in over-commuting again. I was nestled in, 7 miles from home in Eau Claire,” he says. “Bill asked me to come down to the facility for a walkthrough and to tell him what I thought. He knew I already knew about everyone there, but I thought: ‘Why not?’”

The pair toured the facility, met the staff, and talked about the position. It was when Williamson realized that the team in Shipshewana needed someone who understood the staff and their concerns, someone who could make them smile and add character. Someone — as Williamson says — who would bring the donuts.

“I’m an old coach and I’ve done tons of stuff in the athletic community and coaching community from kids to school to other levels. And I think Bill knew that I might need some help in some areas, but I’d be able to bring the team together,” he says. “And he was right! We brought it together and brought morale to a much different level. He was right — this place did need me, even if I couldn’t see it.”

Williamson has always been looking for ways to create better opportunities for himself at Big C Lumber.

When the chance to join the management development program opened, he knew he wanted to be a part of it. But the program has gone through a lot of changes since he first started.

It began as the management development program, a way to build basic skill sets for managers, with the goal of identifying employees to train to take over management roles as long-term staff began to retire. It was developed by Wallace, who is now the president and CEO, and Laurie Mills, now the director of continuous improvement.

It quickly morphed into a leadership development program aimed at helping staff develop knowledge and skills to serve as leaders in the company and the community. Now, as the career development program, it’s becoming more of a set of educational and interactive courses designed to help staff advance their careers.

“We have a lot of long-term employees. You’ll often find yourself working next to a 20- to 30-year employee,” Williamson says. “A big percentage of those folks are set to retire in the near future, so Big C recognized the need to get people trained up in more than just a management role.”

As a mentor and someone who has been a part of the program previously, Williamson was asked to be a part of the team that helped develop the new curriculum for the career development program. The program is in addition to an employee’s 9 to 5 job, so it means they’re going to have to put in some extra hours off-the-clock. They may need to travel to different locations and participate in things they may not have experience in.

As examples, he says it’s not uncommon for people in the leadership program to go to trade shows, work with local schools in their building trades programs or simply go to award presentations and be out among the community. Being in the spotlight can be a challenge for some, but Williamson says it’s always a positive experience.

“It’s about rolling up your sleeves and investing a little more time,” he says. “What you’re asked to do will always be a great experience, it’ll always be something you enjoy. You’re going to open your network and have more tools — by having a mentor or being a part of a team.”

Being a mentor, Williamson works with his crew members to make sure they’re staying on track with the tasks in their training checklist. But, more than that, he’s spending time just talking with them and bonding.

“We have a lot of phone calls and try to solve business problems. In our spare time, we try to get into a little bit of trouble together,” he says with a laugh. “It’s all about building and strengthening the culture. Our company culture is at the forefront of everything we do. It’s ingrained in us and it’s something we take to heart.”

Having been around for 100 years, Big C Lumber has learned what it means to invest in the community, and that includes its employees and their futures — it’s about thinking big. That’s the warmth and compassion that Williamson found back when he started.

“Big C Lumber cares. And that’s hard to find in today’s day and age,” he says. “You can find a career with care and compassion at Big C Lumber. It isn’t just a job. If you’re looking to be a part of a team, you’re going to find one at Big C Lumber.”

If you’re looking to start a career or to switch to a new one, Big C Lumber might be the place for you. We have teams of delivery drivers, salespeople, administrative positions, opportunities within our three manufacturing facilities, and more. Visit our careers page to learn more about the opportunities we have available for you!

Toggle the Widgetbar
We use cookies to ensure that we give you the best experience on our website. If you continue to use this site you agree to the terms and conditions.OkTerms and Conditions